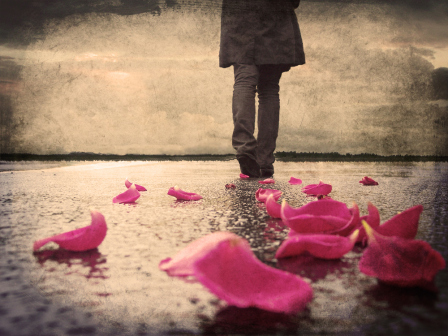 We’re only 3 months into this year and I’ve already learned so much about myself. I think the most important thing that I’ve learned is once I get attached to someone or something I have a hard time accepting change and/or letting go. I’ve always been the type of person that gives people chance after chance. Initially I thought I was doing it for them, now I realize I may have been doing it for me. It takes a lot for me to close a door and walk away from someone (or something). I guess that’s because I never want to have regrets. I never want to wonder what if. I never want to be the “bad guy”. I never want to hear “she walked out on us.” So I find myself still trying to hold on when it appears as though the other party has let go. I say appears because it hasn’t been verbally communicated to me that they’ve let go, their actions just seem to show they have. I’m horrible at reading signs or picking up on clues, I actually need to hear the words. I literally suck at trying to figure things out when it comes to people. So I stopped trying years ago. Now, I simply ask the questions and hope they respond truthfully. Hope the words that they say are backed up by their actions. I hate the feeling of being in limbo. I can accept and deal with anything that is thrown at me. Even when I’m caught off guard; once it hits me and I regain my balance I can deal with it. What I have a hard time dealing with is the feeling of uncertainty. The unknown. The doubt.

You see I have a MAJOR problem with thinking…or maybe I should say overthinking. I never thought thinking too much would become a problem for me. But the older I get the more I realize that overthinking is probably worse than not really thinking at all. When I’m trying to read a person’s signs or pick up on their hints, I tend to blow things way out of proportion. I mean I surprise myself at some of the things I come up with. Seriously, I could write a helluva novel!!!! All jokes aside, I know this is not fair to the other party so I really try to make it a point to just ask. That way all I have to do is accept their response and not come up with a million different responses myself. This however, has proven to be rather difficult, since just because you ask a question doesn’t mean it has to be answered, or that the response is going to be what you expect. Just like you have a right to ask they have a right not to answer. Here again lies my problem, sometimes the lack of response is worse that the unknown for me. Sometimes the change in response is even worse. For example, if a person has responded one way to me 9 times, I kind of expect for them to respond the same way the 10th and when they don’t I panic. I automatically start thinking something is wrong, what did I do, are they mad at me, etc. However, I’m slowly learning that just because something has become the “norm” doesn’t mean you should automatically expect it. Just because you’ve grown accustomed to a certain response doesn’t mean a change in that response is wrong. Nevertheless, I’ve found that this simple change in response triggers even more overthinking.

Ahhhh I honestly wish I could master the art of not overthinking and just letting go and letting it be. I wish I knew how to just wash my hands of things, people, situations, and simply walk away without looking back or overthinking it. My father and I were talking last night and I think I get this from him. My tolerance level is almost too high; I will let someone use me time and time again. In my mind I will come up with a million and one excuses for their behavior instead of just accepting it for what it is. Overthinking! Seriously how do I let go without verbal confirmation? I’ve stayed in places years longer than I should have simply because I wanted to hear the words “you’re no longer welcome”. I’ve tolerated a person’s behavior towards me all because I wanted them to say “Rachelle I don’t want to talk to you anymore”. I’ve continued to try to force something that was clearly done waiting to hear “Danielle it’s a wrap.” I can’t figure out why I insist on giving someone or something that much power. As dumb as it sounds, I would much rather be fired that quit. Put out than voluntarily leave. Now that I think about it, this goes all the way back to my birth….I mean my mom had to a have a caesarian section for crying out loud. I wasn’t coming out on my own; I needed the assurance it was okay to make my exit. But on the flip side, I have no problems leaving once I’ve been asked and/or told too. Once I know, I can easily grab my things and leave. I will not stay anywhere that I know I’m not wanted…but here again is the problem, I need it to be known, not just implied. I’m so over this…I wish I could master the art of just letting go, letting it be, and not overthink and torture myself. 2 thoughts on “Not Overthinking; The Art of Letting Go and Letting It Be”