Old Racist, Young Reckless
How one random act of kindness turned into a life lesson.

(This one’s a little lengthy)

I hesitated about sharing this story because I don’t do these types of things for attention, I do them honestly because…well it makes me feel good. I shared on my Facebook and Instagram pages that last year I started doing monthly random acts of kindness. I picked people based off random things like a dream, a Facebook or Instagram post, a smile as I past them in the store, etc. I never posted any of the stories because again, I didn’t do it just to brag about it, I did it because it was on my heart to do it. If the person decided to share (which some did) that was okay with me, but I just couldn’t bring myself to announce every time I did something nice…however I almost feel obligated to share this one because I genuinely believe it was bigger than the both of us.

3 years ago I moved to Brier Creek, directly across from the county club. I looked at a townhouse inside the country club but the lady that I spoke with left a really bad taste in my mouth. She answered my questions but her whole tone was like “how dare you consider MY neighborhood.” “I really don’t want you here.” I wasn’t sure if she actually lived there at the time, but her whole aura just turned me completely off. I called my mom as I was leaving and told her that I was going to pass on the place. I made up some story about how I felt like I could find a bigger place for cheaper. That was partially true, but the fact of the matter was, this felt like racism and it bothered me. It bothered me more that I was willing to admit at the time. As I was leaving the viewing I noticed the complex that I now live in. The guy that I spoke with there was simply amazing. He didn’t seem to notice my color, age or even my car. He had two questions “Do you like our condos?” and “When do you want to move in?”

Fast forward to today, almost 3 years to the date. I had just gotten home from work; I changed clothes and headed to the grocery store. As I’m standing in line an older white lady walks up behind me. I turn around smile and speak, she barely nods her head, and I turn back around. As I start to put my things on the belt I glance back at her and it hits me, this was the lady from the townhomes. I was almost certain she didn’t recognize me, I mean she’d barely even looked my direction, but I was 100% sure it was her. As the cashier is bagging my items, I whisper “shhhh I got her grocery” to him. He asked me if I was sure as she is now placing her things on the conveyer belt. I’d done this type of thing before so I knew what he was thinking, but unlike the previous times, I wasn’t doing it just to make someone’s day, I had a point to prove and I was determined to prove it. However, she was just as determined not to make eye contact with me which is probably the reason that she didn’t even realize that the cashier was now ringing her items. By the time she realizes it; I’d already swiped my bank card and was signing my name. I looked back at her and smiled, “God bless you” I said. She immediately dropped her head. Now I’m offended, it’s one thing to brush me off when I speak, but I just spent my hard earned money and you can’t even say “Thank You”. A very sarcastic “Wow” was all I could muster out before proceeding to walk out the store.

As I was placing my grocery in the car, she walked up to me; her face was red and soaked. “Why?” she asked. I then asked her if she owned some townhomes in the country club. She stated that she used too. I reminded her of the incident that happened 3years ago and how it made me feel. I explained that I wanted to buy her grocery to show her that whatever stereotypes or preconceived notions she had about black people were simply wrong. This made her cry even more. She asked if I could give her a moment to explain herself. She said it had absolutely nothing to do with my race. She said that prior to my coming to look at the townhomes a young white lady about my age lived there and practically destroyed her property. She talked about how the girl had guys in and out and was basically the tenant from hell. She said that when she was finally able to evict her, the girl started to make threats and told her that her boyfriend was going to come back and burn down the townhouse. She said that when I came in that day to view the unit she realized I was young, assumed I had a boyfriend and didn’t want to deal with what she had just dealt with.

It was at that moment that I realized I was just as wrong as she was. I don’t have many regrets in life, but I regretted not moving into that townhome 3 years ago. I wished I would have moved there so that she could have seen that not all young single people are reckless. I wished I could have shown her that some young people really are about their business. I wished I would have moved in so that she wouldn’t have been walking around for the last 3 years (if not longer) thinking that my generation doesn’t have any respect or that my generation automatically retorts to threats when we can’t get our way. I realized that although I automatically thought she was rude because of my race, it wasn’t really a black or white issue for her; it was a generational issue. She saw a young girl in her 20s and she automatically thought of the only other direct encounter she’d had with another young woman in her 20s. I realized that I was just as guilty for judging her as she was for judging me. It never once dawned on me that her attitude had nothing to do with the color of my skin. She was rude, I’m black, she’s racist, case closed. I was wrong. She’s young, she’s not married, she’s reckless, case closed. She was wrong. I thought old and racist and she thought young and reckless. When the truth of the matter is we were both simply misunderstood. 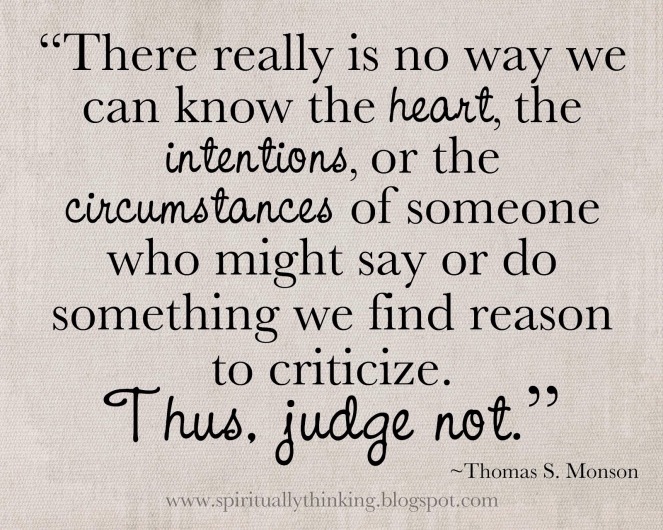