As I pulled into the parking lot I immediately starting shaking. I was scared to allow myself to cry because I knew if I started I wouldn’t be able to stop. I couldn’t believe I was going to sit with my friend as she received her first round of chemotherapy treatments. I could not wrap my brain around the two… Monisha…chemo…it just didn’t make sense. I sat in the car and watched a few people enter the building before fostering up the courage to get out. I felt like I needed someone to hold my hand and walk me in. I finally got out the car still afraid and not knowing what to expect, but wanting to be there. I put on the brave face, smiled and walked in. There was Monisha, smiling, I could tell she was a little afraid, but she was smiling so I exhaled, realizing that I had been practically holding my breath the entire time I was walking in. Sitting beside Mo, was another smiling face. As Mo introduced us, I found myself letting out another sigh of relief. There sat Delora. I’d never seen her a day in my life, but seeing her made me feel like I didn’t have to be strong for my friend alone. She was there to hold my hand, I was there to hold her hand and we were both there to lift up our friend.

As we sat there laughing, joking and basically giving the other guest a show I started to feel a peace. I’m usually very standoffish when it comes to meeting new people, especially women. I feel as though I’m pretty friendly, but you can’t be my friend. But this was different. Dee and I talked and laughed like we had known each other our entire lives. We realized we shared a common love for dance and another mutual friend. (Hey Dorinda) Then she hit me with the question “so what type of skin care products do you use?” I gave her the answer that I’d been giving people for years “Mac makeup and Cetaphil facial cleanser and moisturizer.” She shared with me that she too used to use a different makeup, but liked her current skin regimen better and could tell a difference in her skin already. Next she said two words I hadn’t heard in years Mary Kay.

December 30, 2014…the day that I was thinking would be one of the hardest days for me, turned out to be further proof of God’s word and one of my FAVORITE scriptures “And we know that all things work together for good to them that love God, to them who are the called according to his purpose.” A day that could have been sad and depressing turned into a day of power and hope. I was reintroduced to Mary Kay. Monisha’s purpose had been painted pink, and my friendship with Delora was further empowered by the very same color, PINK. On March 31, 2015, I officially became a Mary Kay Beauty Consultant!!! Yes, you’re reading right…The girl that only wore make up when she was hitting the stage or taking a picture is now a Mary Kay Beauty Consultant. But truth be told…It’s bigger than makeup. It’s bigger than skin care. I now have a partnership with a company that supported the very reason our bond was even formed. I now get to do something I love, empower women to be a better them. I think Deon Sanders said it best “”If you look good, you feel good. If you feel good, you play good. If you play good, they pay good.” So, I’m ready to ready to get some women looking, feeling and paid good 🙂 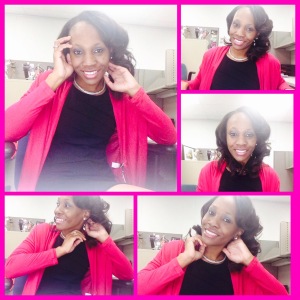