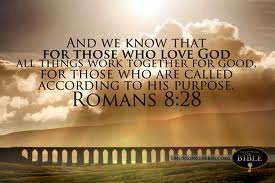 Last night I had a heart to heart with one of my closest guy friends. He was sharing with me how he doesn’t understand why some bad decisions from his past, won’t stay in the past. No matter how hard he tries, how hard he pleads, how hard he repents, they just won’t seem to go away, and stay away. He was saying how his frustration had reached an all-time high and he was almost to the point of being done. Several times throughout the phone call he asked “Why Me”? He then asked me how I remained optimistic even when things weren’t going my way. His exact words “I mean I know you’re saved and everything, I am too, it has to be more than that; what is it?”

My response (not verbatim):

I’m a firm believer that everything happens for a reason. I wrote a blog a few years ago regarding a saying I heard and have since adopted; “yesterday happened like it did, so that tomorrow can happen like it should.” This literally delivered me from the “oh God why me” syndrome. I no longer looked at a “bad” day as detrimental; I began looking at it as preparation. It was during some of my darkest moments that I found myself. It’s because of those things (and of course God) that I’m at this place today. It was my mom’s drug addiction that showed me the true meaning of restoration. That whole ordeal taught me there was nothing I couldn’t face and win! It was my grandmother’s death that caused me to really get serious about dance. She would always tell me to “just dance” so once she died, that’s what I did…Danced! Dancing has opened doors that my degree wasn’t able too. It was my father being away at war that forced me to fall in love with writing. I would write him constantly. I had to paint the picture of my life for him. I had to make him feel like he was right here, though he was worlds away. I got a writing scholarship in college. It was drama with an ex that showed me, if I didn’t love me, I can’t expect someone else to. I had to learn to put my own gas mask on before I tried to save someone else. All of these were major events that at the time I didn’t or couldn’t understand. However, it was those moments of uncertainty and pain that helped prepare me for my true destiny.

7 thoughts on “Yesterday, Today and Tomorrow”